I just finished reading Moyers on America, A Journalist and His Times, published in 2004. (I often buy books that I overlooked when they were originally released, and sometimes I am even slow to read books I buy new.  So, before you dismiss this as a blog about recent politics--although 2004 isn't really very recent--I am actually going to blog about the mid-1890s.) 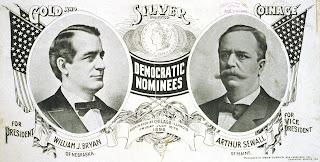 Those of you who are regular followers of the blog are already familiar with the election of 1896, when the Populists joined the Democrats to nominate William J. Bryan, although they split the vote over the Vice-Presidential nominee.  You may want to scroll down to "A Documentary Treasure," posted 11-8-18 to see the local ballots from that election and to "A Peek Into the Voting Booth in 1986" to consider the political environment of that era.

However, the quote from Moyers that inspired this blog is from the wealthy businessman, Mark Hanna, who raised money for the Republican William McKinley.  Hanna said,, "There are two things that are important in politics.  The first is money, and I can't remember what the second is."  Quoting from Moyers, Hanna was "the first modern political fund-raiser, and money was all that mattered to him.  He tapped the banks, the insurance companies, the railroads, and the other great industrial trusts of the late 1800s for contributions of some $6-7 million to the campaign of presidential candidate William McKinley:  big bucks back then."  Bryan raise only 1/10th of that amount.

If you are a serious blog supporter you may even recognize Hanna's name, for he appeared in a political cartoon that I have previously posted, still engaged in financial political matters.  This time, according to the cartoonist and  Nebraska Senator Allen, whose words inspired the cartoon, Hanna was engaged in a little payback for the wealthy McKinley supporters. 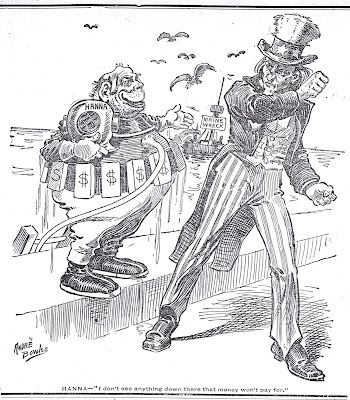 To explain the cartoon, President McKinley called for volunteers in 1898 for the Spanish-American War and proposed bonds to pay for the war.  Sen. Allen objected:  "...the people desire to pay as they go.  ...They do not want this government at the end of the war indebted more than it is at the present time."  Allen believed speculators were trying "to foist upon the people a perpetual national debt.  ...There is not one of that power, sir, who would not see this government sunk to the bottom of the ocean if he could make a fortune by it."

You may remember that the sinking of the Maine had been erroneously blamed on the Spanish.  The cartoon caption reads:  "Hanna--"I don't see anything down there that money won't pay for." He is depicted as a diver amassing bars of gold as a result of the war.  To refresh your memory about the Spanish-American War, you may want to visit "Remember the Maine," posted 8-11-2016.

The vast amounts of money spent on elections today may dwarf Hanna's efforts in 1896, but election fund raising and the benefits those contributions have for our elected officials (and the influence gained by contributors) make Hanna's quote as understandable today as it was in 1896--"There are [still] two things that are important in politics.  The first is money, and I can't remember what the second one is."

(You can click on the images to enlarge them.)

Posted by Lynda Beck Fenwick at 7:53 AM

Them that has the gold makes the rules. Who was is said he didn't need to control the government is he controlled the banks.
If you study all the wars in history from the point of view of how they were financed and sho financed them, you get a very different perspective from the usual DWM history. Financiers guaranteed they would get paid by funding the enemy if payment was not forthcoming. Isn't it fun?