The Military on the Prairie

The common conception of soldiers being sent to the prairie to protect settlers is not entirely accurate.  The motivation had a more commercial aspect.  Historic Fort Hays is a good example.  The Fort was established in 1867 to protect construction workers that were building the Union Pacific Railroad.  The Government saw the importance of railroads to link the large territory which the fledgling nation was seeking to populate. The Native Americans saw the encroaching railroads as a threat to their way of life.  They sought to interfere by tearing up the tracks and attacking those constructing the tracks.  The government sent the soldiers to protect workers and property.

Of course, the investors paying for the railroads were counting on settlers traveling West on their trains and shipping produce on those trains back to the East.  However, those settlers followed the arrival of the trains, arriving well after the soldiers came.

By the time settlers were arriving, the soldiers at the forts were already being deployed elsewhere, and when Isaac Werner arrived at Larned in 1878, most of the soldiers at the nearby fort were gone or soon would be.  The quadrangle at Fort Larned was converted to civilian use for a time, but it is now a historic site well worth visiting, along with the Santa Fe trail historic site nearby.

Returning to exploring Historic Fort Hays, there is a great deal to see.  The grounds document pioneer and military history with placards and exhibits along the walkways.

In addition, at nearby Victoria nine miles to the east of Hays on Highway 40, at the south edge of Victoria may be seen the Victoria Railroad Cemetery, with the graves of Union Pacific railroad workers killed by the Cheyenne Indians in 1867.  Of course, this also evidences why soldiers were posted at Fort Hays to protect those workers against further attacks by the Native Americans combatting the threat to their way of life.

By the time a train carried Isaac to Kansas in 1878, the railroads were serving the purposes for which they were built--to bring settlers to the Prairie and to ship what those settlers produced to cities in the East.

If you visit Historic Fort Hays, located on US 183 Alternate just four miles south of Interstate 70, you can see the original blockhouse, guardhouse, and officers quarters.

You may click on the images to enlarge them, and you may learn more about Historic Fort Hays at http://hays.adnews.net/oldforthays.hrml. 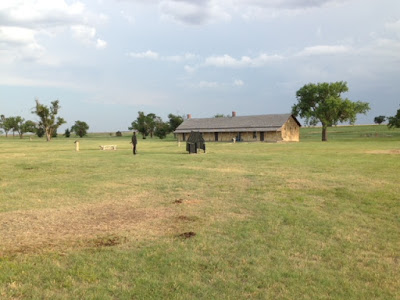 Posted by Lynda Beck Fenwick at 8:15 AM

Forts were built in Texas to protect the settlers from Comanches. They were less than successful for some time until the army learned to fight like the Comanche. But most of the other forts, as you say, were built to protect railroad construction or roads such as the Bozeman Trail (see my next blog when I get it written).