Among my favorite places when we travel are the homes of authors.  Our road trip may have a different ultimate destination, but I will check to see if our route passes near the former home of a writer I admire.  Many of the homes of America's greatest authors have been preserved for visitors, and it is fun to see how they lived and where they wrote. 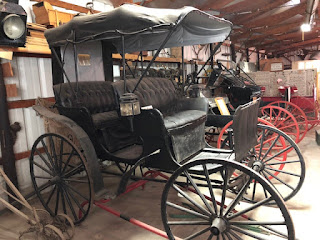 But perhaps no place is more interesting than the town of Red Cloud, Nebraska, where Willa Cather spent her youth and to which she often returned for visits as an adult.  This blog has shared pictures of the many buildings in Red Cloud that have a direct relationship with her stories and novels.  For serious Cather fans, however, there is also the opportunity to learn about the actual residents of her time that Cather used as inspiration for her characters.  An obvious example is Annie Pavelka, the model for Antonia. 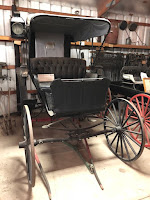 Our most recent trip allowed me to focus on the character of Captain Daniel Forrester in A Lost Lady, described in the novel as a contractor of railroad construction for Burlington.  Rather than describing the plot of the novel, I will use details about Forrester and his lovely younger wife as examples of how Cather built characters and plots from actual residents and events in her home town. Items displayed in the Webster County Museum provide direct references to Cather's practice.

Chapter three describes the arrival at the Episcopal Church of Mrs. Forrester:  "...a low carriage drove up to the door.  Ben Keezer was on the front seat, and on the back seat was a lady, alone, all puffs and ruffles, and a black hat carrying a parasol with a carved ivory handle. As the carriage stopped she lifted her dress to alight; out of a swirl of foamy white petticoats she thrust a black, shiny slipper."

Cather's local inspiration for Captain Forrester was Captain Silas Garber, and the carriage pictured above is the carriage that once belonged to Garber.  How easy it was for me to imagine Mrs. Forrester stepping gracefully from this carriage just a Cather wrote.  "She stepped lightly to the ground and with a nod to the driver went into the church." 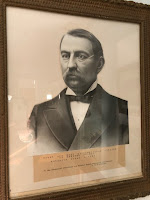 Her husband was described by Cather as looking like "the pictures of Grover Cleveland.  His clumsy dignity covered a deep nature, and a conscience that had never been juggled with.  His repose was like that of a mountain.  When he laid his fleshy, thick-fingered hand upon a frantic horse, an hysterical woman, an Irish workman out for blood, he brought them peace; something they could not resist.  His sanity asked nothing, claimed nothing; it was so simple that it brought a hush over distracted creatures."  The portrait at right is of Capt. Silas Garber, Cather's inspiration for Forrester and one of the founders of Red Cloud.  When Webster County celebrated its 80th year, he was among those men honored as past and present leaders.  (See the framed newspaper page displayed below.) 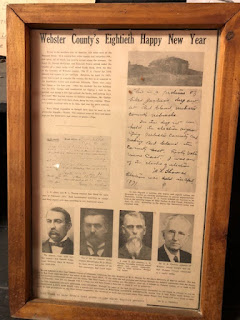 Although it is generally accepted that Garber was Cather's inspiration, his is a good example to illustrate that her depictions were not direct portraits.  Silas Garber served in the Union Army, following which he moved to California and engaged in livestock trading.  He arrived in Webster County, Nebraska in 1870 as a homesteader and general store proprietor, quickly becoming involved in politics.  In 1871 he became Webster's first Probate Judge, and the next year he was elected to the Nebraska House of Representatives.   In 1873 he was named Registrar of the United States Land Office in Lincoln, a powerful position.  In 1875 he was elected as a Republican to the first of his two terms as Governor.  A distinguished man, but never a contractor building railroads for Burlington as his fictional counterpart was.

The novel is titled A Lost Lady, and while Mrs. Forrester is the central character, the relationship she had with Capt. Forrester is pivotal to the story.  "Curiously enough, it was as Captain Forrester's wife that she most interested Niel, and it was in her relation to her husband that he most admired her.  Given her other charming attributes, her comprehension of a man like the railroad-builder, her loyalty to him, stamped her more than anything else.  That, he felt, was quality; something that could never become worn or shabby; steel of Damascus.  His admiration of Mrs. Forrester went back to that, just as, he felt, she herself went back to it." (Conclusion of Ch. VI)

Although I have sometimes referred to Red Cloud as a Cather fan's Disneyland, it is not a false place of artificial reality.  It is a real town that nurtured the development of Willa Cather as a great American author and that gave her memories of real people and places around which to craft her stories, not to write in a historically accurate depiction but rather to capture the time and place using her memories but employing her imagination and her gift for writing to create something greater.  The sources for her imagination are what remain for visitors to explore in Red Cloud today.

If you haven't read A Lost Lady, I recommend it.  And if you have read it in the past, I recommend reading it again.  The thing about great writing is that it remains fresh and reveals something new each time you read it. 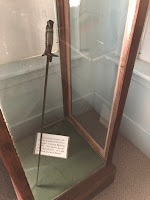 (Sword belonging to Capt. Silas Garber, Union Soldier, and inspiration for Capt. Forrester in A Lost Lady.)   Remember, you can click on the images to enlarge them. 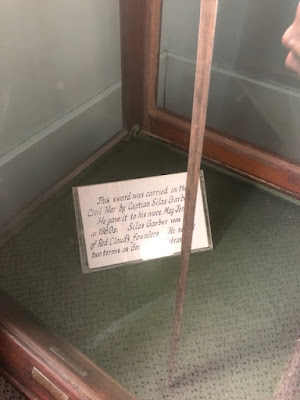 Posted by Lynda Beck Fenwick at 7:26 AM

Great thing to do, I'm envious.

A Lost Lady is one of my favorite Cather works. Thank you, Lyn, as always, for illuminating another piece of her writing.