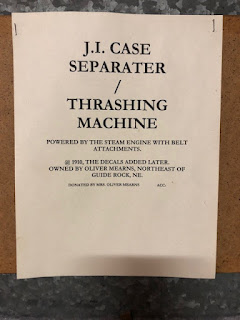 Although we have often visited Red Cloud, Nebraska for the Willa Cather gatherings, we have always been too busy with the Cather events to take the time to visit the local Museum  in Red Cloud.  During the 2019 visit we decided to correct that omission.

I am always on the lookout for information related to the era of the Populist Movement, and while the Thrashing Machine pictured in this blog is a bit later than Isaac's time, it is an example of the advances in farming equipment occurring during Isaac's lifetime.  In the late 1800s, wheat was being harvested by machine in Isaac's community.

You may see the verb thresh as well as thrash  used in reference to the process of harvesting, and Thrashing Machine as used in the label shown above is actually the less common spelling, although both are used.

The process of threshing removes the seeds from the stalks and husks by beating the plant to make the seeds fall.  Isaac mentions using a buffalo wallow (apparently with some kind of canvas over the sandy soil) and walking his horses over the stalks to  remove the grain he raised. 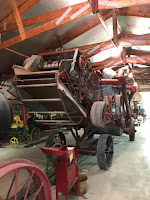 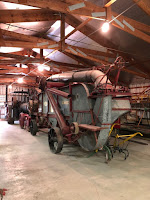 At the museum in Red Cloud we had the opportunity to stand beside the giant thrasher in these photographs, so massive it dwarfed everything around it.

With the early threshing machines of the 1880s the grain had to be harvested separately, by hand or machine, and then fed into the thresher.  Isaac described the mowers that might have been used to cut the wheat.  Until threshing machines were invented, the threshing process was primitive.

The equipment was a simple flail, a stick with a shorter stick attached to the end which was capable of flexing or flailing about as the laborer beat the grain out of the stalks.

Obviously, the process was very strenuous for the laborers.  However hard the work was, and despite the low wages and high taxes workers paid, the arrival of the mechanized threshing machines led farm workers to strike.  Thousands of men who had been employed as farm laborers were put out of work, which put these former workers on the brink of starvation, resulting in what was called the Swing Riots.  Despite the obvious suffering of the laborers, the English government dealt harshly with the strikers, hanging nine of them and transporting 450 to Australia.

As with many new inventions, what was seen as a welcome mechanical advance for humanity was for others the end of their means of livelihood.  The improvements to the early threshing machines led to steam powered machines that could harvest the crops in the fields, and the threshing process advanced from a pile of grain, straw and chaff to belts and blowers that separated the waste from the grain.

Now the monster machines that harvest the crop can pour the cleaned grain into a bin pulled along beside the combine, while men in air conditioned cabs move around the field, the harvesting guided by GPS.  Although far fewer farm laborers are needed, hiring those workers capable of managing the technology can be a challenge.  So far, humans are still needed in our technologically advancing world!


Posted by Lynda Beck Fenwick at 9:35 AM