Kids and Nature, (first titled Confessions of a Slow Reader) 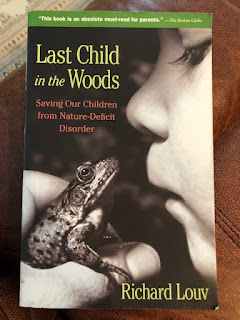 I just finished a wonderful book titled Last Child in the Woods by Richard Louv.  In fact, I loved it so much that I bought several copies of the book to gift to friends who have young children.  I recommend it very highly.

The Last Child in the Woods is about the importance of providing childhood experiences with nature.  Louv is not opposed to watching nature programs on television nor walks in parks with carefully mowed lawns, tidy flower beds, and playground equipment designed for safety.  However, he advocates for children's need to experience the untamed woods and prairies that fuel  and develop an unsanitized, curiosity-motivating, imagination-inspiring, unsupervised, relationship-developing opportunity for children to experience the natural world that is rapidly disappearing.  He advocates our responsibility to provide that opportunity.

Louv argues in his 2006 book that in our desire to keep children safe, we have cocooned them from opportunities to experience the wonders of nature which are needed to create healthy children.  He points to such issues as childhood obesity, depression, and attention disorders as side effects from restricting exposure to interactions with nature.

Paul Harvey (1918-2009), a well-known radio pundit in the late 1900s, appeared in the city where we lived when we were fresh out of college, and I have never forgotten an analogy he used in his speech.  He said, 'you can't sweep the floor with a broom and expect not to have to sweep it again.'  Problems may be resolved, but they will not stay that way without ongoing efforts.  (Harvey received the Medal of Freedom in 2005, and the photograph at right shows that ceremony.)

Using Harvey's analogy, we can compare our efforts to build safe playgrounds and to protect children from the dangers of strangers and unsupervised explorations beyond the boundaries of home to aggressively sweeping away not only the bad but also the good things of childhood.  Richard Louv would suggest that we should learn to sweep more thoughtfully--realizing that our aggressive sweeping has also swept away the very things that fuel imagination, inventiveness, problem solving skills, working with others, unstructured active play, and other things important to children's healthy growth.


It is the nature of life that there will always be issues to resolve, misdeeds to confront, and lessons to learn, and we should never expect a perfect world.  But, if we discover that we may have swept the floor too clean, perhaps we should try a different broom.

Our own histories can often guide us in raising the next generation.  I, for one, certainly remember hours spent in the sand hill plum thickets, creating imaginary rooms in areas cleared of thickets by cattle or other animals.  I'm sure the sharp thorns in the thicket drew my blood many times, and my mother may have worried about the dangers of a thorn damaging an eye, or perhaps she worried about snakes, badgers, and ants sharing my playground. But, she didn't stop my fun, and I survived.  I wandered for miles bare foot on our sandy roads, and I disappeared into the fields and tree rows for hours without telling anyone where I was headed when I left the house--primarily because I had no idea where I was going.  I wandered and experienced the joy unanticipated discoveries.  Of course, the world has changed, and the dangers parents fear for their children today are real, but children still need the freedom to explore and imagine.  Louv reminds his readers of that.

Without the courage and curiosity of our ancestors, they would not have crossed oceans.  Without the imaginations and initiative of homesteaders like Isaac Werner to confront the unknown dangers of the prairie, the lives of their descendants would certainly have been different--assuming that those descendants would even have been born.

Richard Louv worries that if a generation of children mature without the unplanned discoveries of nature's beauties and wonders, not only will it be a great loss to those children but also a huge loss to nature itself when a generation without the childhood experiences of nature become decision-making adults.  Those of us in farming communities may not understand how nature-starved urban children can be, with buildings instead of trees casting shade, paved playgrounds and sidewalks offering no opportunity for making mud pies or feeling sand between their toes, with the beauty of stars bleached by constant lights and the explosion of colors as the sun sets blocked by a profile of roof tops.

After talking with a group of children, Louv asked them to describe their favorite place to play.  One little boy said, "in the house."  When Louv asked him why, the boy said, "because that's where all of the electric receptacles are."

It is certainly something to think about.
Posted by Lynda Beck Fenwick at 10:58 PM

A great deal of the bubble wrap is caused by fear of lawsuits. Parents sue. And parents who give their kids room end up in trouble with the law as bad parents.