Because Isaac Werner's journal resumed in 1884, and I follow his story until his estate was settled in 1898, the presidential years of Grover Cleveland have been part of my research.  The son of a Presbyterian minister, Cleveland was known as a man of integrity, who fought political corruption and patronage.  His campaign slogan in 1884 was "A public office is a public trust."

However, his intervention in the Pullman Strike of 1894, backing the Railroad rather than the striking workers, and his support of the Gold Standard rather than Free Silver, put him in opposition to populists like Isaac Werner.  The picture at right shows Richard Olney, a former railroad attorney, and the one acting for the president in the Pullman Strike, (on the left of Cleveland in the photo, hands clutched in his lap).   Other decisions that were contrary to the needs of workers and veterans were his veto of hundreds of private pension bills for American Civil War veterans and his veto of the Congressional Seed Bill, which had appropriated funds to purchase seed grain for farmers whose crops had been completely destroyed by a drought, leaving them nothing to plant for the next season.  He justified his veto, saying:  "...the lesson should be constantly enforced that, though the people support the government, the government should not support the people."

One position taken by Cleveland would have pleased populists, when he stood up against the railroads by ordering an investigation of the western lands granted to the railroads by the government, resulting in the forfeiture of some 81,000,000 acres because the promised rail lines for which the lands had been granted had never been built. 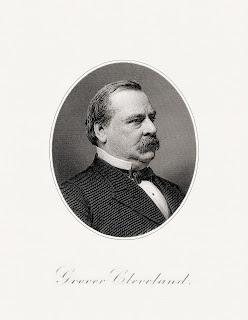 
The tradition of serving only two terms was established by George Washington, although there was, at first, no prohibition against running again.  Franklin Roosevelt ignored that tradition, having won the presidency four times, 1932, 1936, 1940, and 1944, although he died less than a year into his fourth term.

President Ronald Reagan expressed disapproval of that limitation to a reporter, saying the inability to run for a third term, whether or not the president actually chose to do so, inhibits a lame-duck president from accomplishing important matters because everyone knows his power will end at the close of his second 4-year term.

The Constitution states that in the case of impeachment by the House and conviction by the Senate, there are two penalties imposed on the guilty president:  removal from office and disqualification "to hold and enjoy any Office of honor, Trust or Profit under the United States."  Since such a conviction has never occurred, the manner in which removal and disqualification occur has never been employed.

Recently a man, known for spreading conspiracies, tweeted that although President Trump has been impeached, were the Senate to fail to convict it would nullify the president's first term and allow him to run for office two more times.  That tweet is inconsistent with the 22nd Amendment stating "No person shall be elected to the office of the President more than twice..."  While President Trump might run for President a second time, to attempt a third term would violate the 22nd Amendment.

In the case of President Cleveland, he did seek the nomination for a fourth run for the presidency but failed to be nominated by his party.

(As an aside, looking back to last week's summary of presidential firsts in communication, Cleveland was the 1st president to be photographed by a motion picture camera when, in his final hours in office, he was photographed at William McKinley's inauguration on March 4, 1897.)