Art is for Everyone!

At noon on Friday, February 7, 2020, I will be sharing some of my art at the Filley Art Museum in Pratt, Kansas.  The Museum has initiated a series of noon time programs on the first Friday of the month called Lunch & Learn, featuring artists from the region who speak and share some of their work.  It is especially nice for working people who can bring their sack lunch and enjoy the program during their lunch break, but everyone is welcome, with or without a snack, and admission is free.

My theme on Friday will emphasize that whether you are an artist, someone who wants to learn more about art, or someone who loves to visit art museums and support the arts, Art is for Emeryone.

It certainly had an important place in Isaac Werner's life.  Isaac was creative, and the sketch, shown at left, of his invention to wash bottles when he was a young druggist in Rossville, IL appears in the margin of his 488 page journal.  Most of his margin drawings relate to ideas for inventions or furniture, but some are like his tiny illustration of a local church.  There was also a large drawing of his invention for a thatching machine folded inside the journal, as well as his design for a chicken house.  Among Isaac's many talents was art! 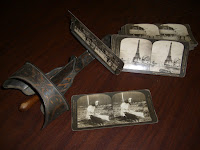 However, his appreciation for art was not simply his own practical drawings.  There was his stereoscope, probably similar to the one at right which belonged to my Beck ancestors.  Isaac mentions in his journal sharing his stereoscope cards with my great grandparents.

His library included such wonderful books as Classical Antiquities  written by a professor at Amherst College and containing elaborate illustrations such as full page  engravings of the Pantheon and the Ruins of Athens, the Pyramids, and Greek sculptures.  In order to understand the sort of books Isaac collected, I found an  edition of Antiquities online published at the time Isaac lived, as well as other titles from his collection.  One of the many books in his library was Cuba with Pen and Pencil, published in 1871.  I bought a beautiful facsimile edition published in 1989 containing all the lovely drawings of Cuban scenes and people.

The books in the photograph are some of the titles from Isaac's library that I acquired in editions near years Isaac's was collecting.  The book with a black cover and a red rectangle with the title in gold is the book about Cuba and to the right is the Antiquities book.

Another example of how people of the late 1800s valued the arts is how quickly they built opera houses in their small towns.  Some served multiple purposes, with level floors also used as skating rinks.  That was true in St. John, and is true in Red Cloud, NE where the lovely opera house has been restored and is the heart of the Willa Cather Foundation.  The dual use as skating rinks should not mislead your image of the elaborate structures.  Other early opera houses, however, had fixed seats on sloped floors, and were designed strictly for performances.  Once these communities could be reached by trains, performers and stage sets arrived to entertain.

When I drive the main streets of Kansas towns  that date back to the late 1800s, I ignore the current store fronts and look up at the second floors and roofs that escaped the 'modernizing' of the 1950s and 1960s.  I admire the intricate brickwork and carved stone figures and designs.  Many of them proudly display the carved date of their construction.  The beauty of these details reveal the refined aesthetics of the day, even if there were still people living in dugouts on country farms.

This respect for beauty was shown in the public buildings as well.  The first courthouse in St. John was a simple building in the square, today's city park but then a dusty square.  But citizens wanted a fine courthouse to represent their community, so funds were raised to build the elaborate brick building at left.  Unfortunately, it had to be replaced, probably for a combination of reasons, including these two:  first, the bricks were soft and gradually eroded, and second, the robbery attempts involving dynamite exploding in the County Clerk's office, in an attempt to access the safe, weakened the structural stability of the building.


The St. John School House of that era also reveals the esthetic taste of their citizens.  I cannot help but marvel at the ability to build such structures at that time, lacking the powerful equipment we have available today.  County schools of that time may have been sod or wood, and by the turn of the century brick, but the respect for education was just as strong in those crude structures.

The arts were important then and remain essential today, but I wonder if we prioritize them as highly today as our ancestors did.  Certainly leather bound books and the universal passion for reading seems less important.  The efficiencies of our buildings seem more important today than the elegance of the past.  Many schools place the teaching of art at the bottom of the budget, if it remains a part of the curriculum at all.

How fortunate our region is to have so many resources that preserve history and the arts.   Pratt is particularly fortunate to have schools that value the arts, museums that preserve our past and respect the plants and animals of our region, a  newly remodeled library and a state-of-the art museum like the Filley.  I am honored to have been asked to speak at the Filley at noon on Friday, February 7, 2020, and I look forward to seeing some of you who read my blog at the Filley!
Posted by Lynda Beck Fenwick at 8:19 PM