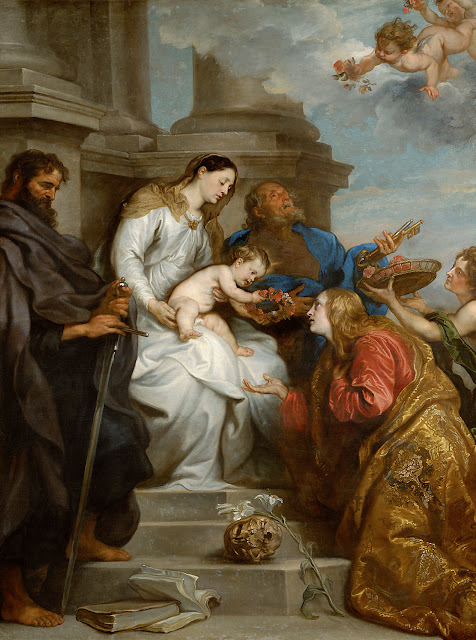 Like most of you, my actions have been limited by the coronavirus, and my husband and I have stayed home.  Certainly, I have enough unread books to keep me busy for quite a while.  Research for my blogs also occupies significant time, and somehow I came across the story of Saint Roselia.

Saint Roselia lived from 1130-1166, and the story of her life has variations, as might be expected from the oral traditions of that time.  What is fairly consistent is that she was born to a noble family and was devoutly religious.  She chose to live as a hermit in a cave on Mount Pellegrino, where she died alone in 1166.

In 1624, nearly five centuries after her death, a plague struck the city of Palermo, the first reported case on July 1st.  Descriptions of how Saint Roselia became connected with protection of the sick or ending of the plague vary.  One source says that she appeared to a sick woman, and then to a hunter, whom she directed to her remains and ordered him to have her bones carried in procession through the city.

Another account says that the Franciscans uncovered her remains and brought them from her cave to  be carried around the city.  After the plague ceased, Saint Roselia was venerated thereafter as the patron saint of Palermo.

Her bones had lain in the cave for a very long time, and it may be that the only identifiable remains were her skull.  It is often included in depictions of Saint Roselia, and pink roses are also included in many paintings, in honor of her name.

The Flemish painter, Anthony van Dyck was in the city to paint a portrait, but the quarantine trapped him there and it is his five paintings of Saint Roselia that established the iconography associated with her.  She remains the patron saint of Palermo in Italy and is honored in other places as well.

The painting at the beginning of this blog was painted by Anthony van Dyke and is now in the Kunsthistorisches Museum Wein, Bilddatenbank.  It represents the coronation of Roselia as a Saint, and some of the iconography associated with Roselia can be seen in the painting, specifically, the skull on the steps and the pink rose held by a cherub in the upper right corner of the painting. Because  van Dyck depicted her with blond hair, she is traditionally shown that way.