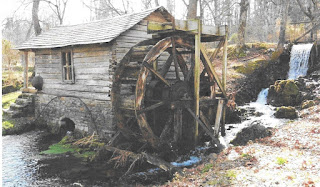 In his journal, Isaac Werner describes going to Webber's Mill to have corn ground.  The Webber to whom he referred was Ezra Webber (sometimes Weber), who came to Stafford County about 1874, probably a few years earlier than Isaac's arrival.  In the St. John, Kansas Centennial collection of stories and newspaper articles, 1879-1979, a descendant, Erma Abbot-Evans described her Grandfather Ezra's mill.  "[My grandfather] ...located on the Rattlesnake creek southwest of St. John, near the Neeland Ranch.  Shortly, he built a grist mill using stone burrs.  This was located near a large spring which produced enough water to make the power for the mill.  Many pioneers came miles and miles to have corn ground into cornmeal.  Often, Mr. Webber kept a small portion of the grain for his pay as money was very scarce in those days."

When Isaac wrote in his journal about the Webber Mill on the Rattlesnake Creek, I struggled to imagine how that creek on the flat prairie could power a grist mill.  The image in my mind of old mills pictures rugged terrain with fast flowing water tumbling down rocky falls to turn the water wheel, more like the image above.  I do not know how Ezra Webber used the "large spring" to power his mill, but he apparently engineered some method.

Isaac mentioned his annoyance with careless neighbors who took dirty grain to be ground, leaving behind so much dirt and grit on the grinding stones that Isaac was unable to use what he had ground for feeding his chickens.

Some of you may be familiar with the term "That is grist for the mill."  For example, if you and a friend were discussing an idea, and your friend mentioned something you had not considered until your friend shared the idea, you might answer "That is certainly grist for the mill."  The saying utilizes the idea of grist, or something like flour or meal produced by the grinding of the mill.  In other words, your friend's suggestion has produced something worth considering.

Definitions online suggest "something that can be used to advantage," "something useful for a particular purpose," or "something that helps support someone's point of view."  The grist or product from milling is being used as an analogy for producing a new idea or perspective.

It is an old saying, and many of us have forgotten the meaning of grist and may have no knowledge of mills and grinding stones.  But, it is a good saying.  A willingness to see things from someone else's perspective or a willingness to consider new ideas is often productive.  Beware, however, as Isaac warned, of accepting grist from a milling stone that has been adulterated by those with careless thinking.

It would be interesting to look at the topography of the mill site. There must have been a fair flow from the spring to drive the wheel. Even a slow flow with volume the system could be geared right to turn the stone. Do you ever go by there?

I have not been to the specific site. Nothing can be easily seen, apparently, as I have driven by that area. Apparently there was a spring that Webber somehow engineered to power the grinder. I am told that it was on the Rattle Snake Creek, and that doesn't have the flow that it once did. A friend said he could take me out to the site, but we never managed to do that. I need to. I am curious about it, for sure.