I believe I have posted a Memorial Day blog each year since beginning this blog.  If you are interested in reading earlier blogs, go to the listing of years to the right of this blog and click on the year you would like to visit.  When that year comes up, click on May and then select the week with the last Monday in May.   Since 1968 the last Monday in May has been the date for celebrating Memorial Day.

In the past, Memorial Day was generally celebrated on May 30th, whatever day of the week that fell. Some places, however, had different days on which they honored the fallen heroes of our military.  Historians have found at least 25 different claimants for originating Memorial Day, also called Decoration Day, but the fact is that many cultures throughout history have had a tradition of decorating graves.

For most of us, our tradition includes placing flowers at the graves of loved ones, whether family or friends.  However, Memorial Day is especially a day for honoring members of the military.  This year, in the midst of efforts to stop the spread of the coronavirus, traditional observances were curtailed.

Yet, as I sat in our vehicle this past Monday, I watched as men of the Vietnam era and later arrived in their VFW uniforms on a rainy day, prepared to show their respect for their fellow veterans while respecting the social distancing and limitation on crowds. Monday's rain did not pause, and although no ceremony was conducted, people in their cars and pickups drove through the cemetery, each vehicle undoubtedly carrying those with their own memories and reasons for having come.

As I waited in our vehicle, I looked out across the cemetery at all of the flags marking the graves of soldiers from The Civil War (after which many Union Soldiers came to our local community to claim homesteads), the Spanish American War, World War I, World War II, the Korean War, and Vietnam.  If you look closely at the photograph above you can see the American flags marking soldiers' graves into the distance.  (You can click on the photographs to enlarge.) 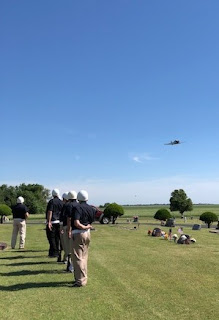 Because this year the last W.W. II veteran who participated in the local Memorial Day ceremony had passed away, and in addition, the 75th Anniversary of the end of W.W. II is this year, there were particular reasons for the observance of the occasion.

The veterans who had gathered on Monday decided, because it was a particularly significant year for remembrances, to return on Saturday to honor those men and women who served their country over the decades.

On May 30th, the date that was in the past the day set aside for the day of remembrance, the VFW veterans returned at 10:00 a.m. Saturday morning, to conduct the services they had intended.  Larry Fenwick delivered an address to recognize all of the 212 veterans buried in Farmington Cemetery, but particularly the 92 who served in W.W. II.  Of those, 11 young men gave their lives for their country, and Fenwick remembered each of them with specific tributes.

Many relatives of the veterans being remembered were present among those attending the service.  A special tribute was provided by Steve and Brenda Gross, flying their T-6 Texan, the last trainer a young pilot would have flown at the conclusion of his flight training in W.W. II.  Today the plane is used by Gross Flying Services, but it provided an emotional and thrilling tribute as it made its two passes over the cemetery and ended its last pass with the Missing Man symbolic departure.
(Updated 5-30-2020)