One of the stories I included in "Prairie Bachelor, The Story of a Kansas Homesteader and the Populist Movement," described how Isaac Werner intervened to help a neighbor youth when the doctor from town had told the boy's mother there was no hope.  Isaac not only sat with the boy to give the young man's mother some time to rest, he also visited two neighbor ladies for advice about a better diet for the sick boy and returned twice with his tools to repair the unsteady bed and to secure the windows and doors letting in the cold.  His help over a period of several days and nights had a happy ending, for despite the doctor's prognosis, the boy recovered.

Isaac's numerous efforts to save the sick teenager may have been more than was common, but it was and remains common for neighbors to pitch in when a neighbor needs help.  Recently, neighbors helped harvest the corn of another neighbor in my community, so the tradition remains active. 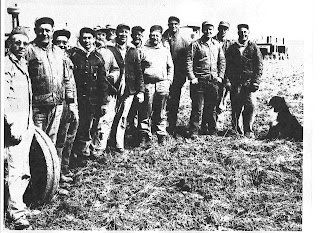 The photograph in this week's blog is an example of such a gathering.  If you look closely, you can see that the thirteen men, (plus one dog to keep away the unlucky number 13!) are standing in front of several tractors.  The implements being pulled by the tractors cannot be seen in the image.
Often the gesture of helping a neighbor is the result of illness.  Sometimes it is the result of a death, the neighbors having gathered to help the widow bring in the crop.  The tradition does not depend on any particular reason for helping the neighbor, but rather on the need for help.
The picture and the identity of the famers were supplied to me by Doug Lamb a few years ago.  He is the young man with his thumbs in his pockets third from the right end of the row.  Doug has since passed away, as perhaps most or all of the men in the picture have.  The tradition they represent continues through some of their sons and grandsons.
From left, the individuals pictured are:  Clifford Locke, Cy Turner, Don Gibson, Verne Seibert, Red Satterlee, Edgar Preston, Paul Satterlee, Noel Graebner, Clinton Blount, Doug Lamb, Eston Piland, Bob O'Connor, and Harry Seibert's Dog.  A note at the bottom of the list of farmers given to me reads "Working ground for Verlin Tucker."
If anyone visiting this blog remembers the reason the men had gathered at the Tucker field or the year the photograph was taken, please share it in a comment at the bottom of this blog.

A Note: Linda Lamb called to share that the group of men gathered in the early 1960s, perhaps 1961 or 1962, to help a friend battling cancer. She commented that because the men were wearing jackets, it was probably early spring or perhaps fall, getting the land ready to plant wheat. I hope others may have more stories to share about this day of friends helping a friend. My hopes that others would add to this post came true. Tom Tucker, son of the farmer whose neighbor's came to his aid, has added a comment. For those of you who may not check the comments, I will share his words. "This picture was taken in the spring of 1963 or 1964, when my dad was sick fighting cancer. These great friends and neighbors came together and worked the ground the first time over in the spring while I was away at college. Nolan Cummings is also in the picture. I have this picture and a picture of the thirteen tractors all in a row on my wall at home. I will always be grateful to these folks." To add a note to Tom's comment, after graduating from college, Tom continued to farm for a while but now lives in Texas where he is a CPA.
Posted by Lynda Beck Fenwick at 7:45 PM

This picture was taken in the spring of 1963 or 1964. Verlan Tucker was sick fighting cancer and unable to work. These wonderful friends and neighbors came together to work Verlan's ground the first time over in the spring. Nolan Cummings was also in this picture. This picture proves that there's nothing better than friends and neighbors in the county. I will always be great full to these folks for helping out my Dad and Mother when my Dad was sick. I have this picture and a picture of the thirteen tractors used by these men on my wall at home.

I remember seeing one or two of these events. One was a field across from Ed OConor and west of the parks farm just across the Macksville Hwy. at the airport.