The Challenges of Keeping a Journal in Early Days 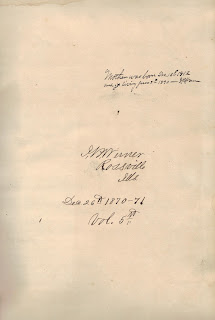 One of the followers of this blog commented on how seeing Isaac Werner's signature moved her, bringing him to life in a way that his transcribed words alone could not do.  I have shared in an earlier blog post  how special it was for me to receive the gift of a book in which Isaac had written his name.  Although I still long for the discovery of a photograph of Isaac, his signature remains almost as intimate.

Of course, I spent months transcribing his 480 page journal, so I can certainly recognize his writing.  Early blogs have explored the significance of dropping cursive writing from the curriculum of public schools.  The art of a distinctive penmanship has been a mark of education and aesthetic appreciation for generations, and the abandonment of that discipline is regretted as disappointing by many of us. 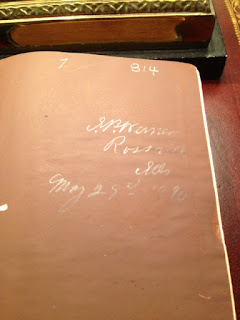 In past years I was often complimented for my style of printing.  Today, I am more likely to be complimented for my cursive script.  Either way, I believe how we write introduces us in a particular way.  Many graduates of the past decade no longer have been taught cursive, and even their training in printing is treated as only an adjunct to the "real" writing they will be doing electronically.  In short, writing by hand is not taught as particularly important, and it certainly is not considered an extension of the writer's personality, respectfulness, or education.

Transcribing Isaac's penmanship from his journal was challenging, not because his writing was careless but rather because of how densely he often wrote and because some of the lettering was of a style no longer used. 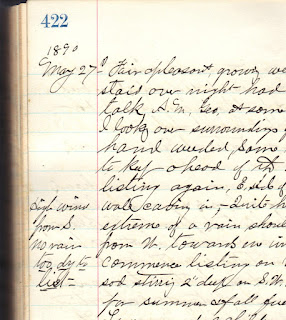 However, the biggest problem was the ink.  I suspect that living far from town without a horse may have caused Isaac to stretch his ink by adding water when he noticed the ink well getting low and he had no plans for a trip to town.  The paleness of the ink did not appear to be the result of fading through  exposure to sunlight.

In 2016, the Berk's History Center republished the April 12, 1946 article by Luke Sutliff titled "An Old Recipe for the Making of Ink.  The recipe was taken from a 1748 German Almanac.  "It often happens that if people in our country have something to write they will take gunpowder and water, and make ink, and write with it."  The author of the recipe complained that when the gunpowder and water ink dried, it not only smeared but could be wiped off the paper.

Instead, his recipe suggested "pulverize a piece of cherry tree gum the size of a bean, let it dissolve in as much water as half an egg shell can hold and add the [gun?] powder afterward for then the ink will not wipe out."  The author also suggested "gallnuts from oak trees in the late summer when they are ready to fall and are soft" with a recipe including vinegar, vitriol and gum added later.

The ink recipes sounded confusing to me, but the 1946 article had added an ink recipe from the 1943 World Book Encyclopedia, and I hoped it might be simpler.  It wasn't!  It involved a "pound of bruised nutgalls, one gallon boiling water, five and one-third ounces of sulphate of iron..., three ounces gum Arabic previously dissolved, and a few drops of antiseptic such as carbolic acid."  I failed to make it through the details of steeping and straining.

Not only do I now understand why Isaac would have preferred to buy his ink in town and water it a bit if he ran low before he anticipated another trip to town.  I am also grateful for my ball point pens!

Ink is something I never thought about. These recipes for making it make me appreciate my ball point pen, though in grade school I had both a refillable fountain pen and an ink cartridge fountain pen.
The hours you spent transcribing are incredible. So much patience. His handwriting is quite good in the example but if it were pale and had unusual letters that would have made it difficult, for sure