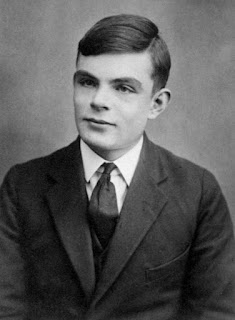 One of my favorite bloggers is Maria Popova, who often guides me to overlooked books published in the past.  A recent blog post at "Brain Pickings" featured Alan Turing (6-23-1912 to 6-7-1954), who played such an important role in theoretical computer science.  Popova shared how, as a young boy, Turing was given The Children's Library, Natural Wonders, by Edwin Tenney Brewster.  In the book, Brewster had described how much of our body is constantly changing, using in his description an analogy of cells as living bricks.  The young Alan Turing was fascinated.

Turing grew up to become a leader in the development of artificial intelligence and is particularly known for his role during the Second World War working in Britain's codebreaking centre.  Charged with breaking the German naval cryptannalisis coded messages, he devised a number of techniques for breaking German cipers.  The work of his group, and particularly of Turing, may have shortened the war in Europe by more than 2 years and saved over 14 million lives.  His role in theoretical science represented a formalization of the concepts of algorithm and computation.

The coronavirus has forced many of us to expand how we use our computers, but movies have long ago been intrigued by the idea of artificial intelligence resulting in plots about a takeover of the world from we less intellectually equipped humans.  Turing must have given this subject some thought, for he raised questions of whether a computer would ever be able to "enjoy strawberries and cream, make someone fall in love with it, learn from experience, use words properly...?"

At the time Turing raised those questions, such possibilities may have seemed insurmountable, but today we know that computers can use words to ask and answer questions.  We know they can learn from experience and self correct.  Advances in self driving vehicles reflect the growing applications of data and algorithms.  We know, at least based on the amount of time most of us spend on our computers and smart phones, that we are certainly infatuated, if not in love, with the seemingly indispensable computers in our lives!  As for enjoying strawberries and cream, taste and smell have proved to be challenging for computers.  Sensors have been created to detect such things as salt, sugar, and bitterness, but the human use of both tongue and nose to achieve the sense of taste has yet to be replicated.  Scientists are working on an electronic tongue, but appreciating strawberries and cream is beyond today's computer.

Thinking about Turing and what he achieved, and then considering how much has changed since his death in 1954, led me to think about how surprisingly rapid change is.

Isaac Werner and his neighbors came to the prairie and built dugout homes or structures cut from blocks of sod.  The only horsepower they possessed had four legs, and the books they read were viewed with candle or lamp light.  Yet, in only a few years they had homes of wood, powered farming equipment, and towns with street lights, multilevel brick businesses and street cars.

Each generation sees changes the generation before could not have imagined.  To better understand ourselves, it is important that we know the history that came before and shaped who we are.  Lacking that awareness, we will continue to change, but we may leave behind wisdom our ancestors could have shared.

Maria Popova concluded her "Brain Pickings" essay with these words: "The triumph of history is tracing the roots--ancient and alive--of our present condition in the world. The Triumph of self-understanding is tracing the roots of the formative influences that make us who we are, that shape the people who shape the world."
Posted by Lynda Beck Fenwick at 6:44 PM

I love walking through our nearby cemetery and always look at the dates on the headstones. There are several of babushkas born about 1900 who lived almost a century. I marvel at the history they would have participated in. And the technological changes they would have seen or known of.