Those of you who regularly follow my blog know that I love illustrated children's books, and this blog shares a story teller who has retained his popularity for centuries.  "Aesop the fable writer" was mentioned by the Greek historian Herodotus, describing Aesop as a slave living in ancient Greece during the 5th century BC.  Plato wrote that Socrates knew the oral stories of Aesop and that during his time in prison, Socrates converted some of Aesop's fables to verse.

The tradition of using the ancient fables of Aesop as guides for ethical behavior continues even today, and just as Socrates did, modern writers use the themes of Aesop in their own versions of his stories.  The simple lessons are easy for children to grasp; yet, the lessons are equally true for adults.  In fact, the fables were originally told to adults as ethical guides.

Among the illustrated children's books in my collection I have several books of Aesop's fables, and two of my favorites are illustrated by Jerry Pinkney and John Rocco.  Pinkney has used the fables in several books, including one titled "Aesop's Fables" containing 61 of the stories, with many illustrations, including the one pictured in this blog.

One of my favorite fables is commonly titled "The Boy Who Cried Wolf," a simple story about a young man sent to watch the sheep and call out a warning if the wolf appeared, to alert the villagers to come drive the wolf away.  His simple responsibility bored him, and he sounded the warning falsely, just to break the monotony, not just once but a second time.  The villagers were disgusted by his false warnings, and when the wolf actually appeared and the boy cried "Wolf!" no one came.  The simple moral to the fable as stated in Pinkney's book:  "No one believes a liar."

John Rocco chose the same fable, but as creative people often do, he added his own twist.  The little boy in his version also falsely cried wolf and lost the trust of the villagers, but in Rocco's tale, the wolf is old and knows that he is not really able to chase down a goat, so he bargains with the boy.  He tells him to select one of the goats and take it to the wolf's garden on the other side of the mountain, and tie it to the fence post.  That way, the boy will regain credibility with the villagers since a goat will be missing, and the wolf will get a goat.  The boy agrees, and he does deliver the unlucky goat, but when the wolf goes out to the garden and sees the goat, he discovers that the goat has eaten all the weeds and the garden looks beautiful.  The goat apologizes, admitting that he is a picky eater and he prefers weeds to vegetables.  He begs the wolf not to eat him, and the Wolf agrees, concluding, "What's one breakfast compared to delicious vegetables for the rest of my days." 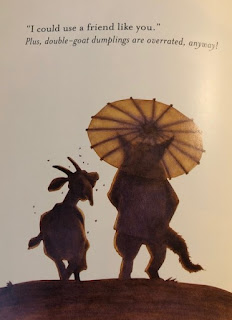 I love both books, and both themes are important.  No one should be a liar, but compromise can sometimes work to the advantage of both sides.  The lesson Aesop teaches is that a liar will be found out and disbelieved if he continues to lie, and the assumption is that once discovered, the liar will admit his obvious guilt and stop lying.  Aesop understood that lying is not  insignificant, and most wolfs are not vegetarians.  Much as I love John Rocco's positive outcome, Aesop's simple moral is the better lesson for us to learn.  Beware of a liar, for when you can no longer trust the truth of what the liar says, the result may be your own loss.

Posted by Lynda Beck Fenwick at 10:32 AM