Trees and the Hand of Man

Isaac Werner must have planted his peach orchard soon after arriving on his claim, for by the time he resumed writing in his journal, he was already enjoying peaches from his trees.  In fact, he admitted that sometimes he was so hungry for fruit that when his peaches finally ripened he was so greedy to enjoy them that he gave himself a 'tummy ache.'

He had melons from his garden, and he tried to add apples to his orchard, especially looking forward to sharing them with his horses, but the delivery of a dozen young trees was too late in the season and his attempt to wrap their roots for planting in the spring failed.  He does mention a single apple tree later in his journal, but whether it was the lone survivor or a different tree planted earlier I do not know. 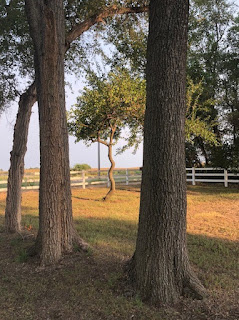 This blog, however, is inspired by my favorite tree at the farm.  Its spiral-like trunk makes me smile every time I see it, and when we relax on our front porch, I never fail to look over at Mother Nature's own bonsai tree.
When we returned to the farm, there was more than just the old house in need of attention.  Trees had survived, but they needed pruning, and some needed to be removed. We did a great deal of work, but we also had to call in the professionals.
The little spiral tree was in a crowded maze of trees, and most of them were removed.  I can't remember who did the work in that crowd of trees, but thank goodness the interesting trunk was noticed and left to make me smile each time I see it.
Although Mother Nature trained my favorite tree, humans have many ways to alter the appearance of trees.  I found the website of Sudbury Design Group online and am using their definitions for the various alterations.  A visit to their website offers an enjoyable collection of images.

Believe it or not, the two figures at right are trees, an example of Pooktre done by the Sudbury Design Group, by gradually shaping trees into a desired form by starting with a cutting and working with the vine-like area on the branch behind the growing tip.  The new growth follows a wire form, and where it needs to divert, a graft is bonded, which continues growing until the shape is complete.
Espalier and Pleaching have similar training requirements as well as similar purposes.  Espalier is training a tree to grow up a wall or other flat surface--decorative or to increase fruit production.  Pleaching is weaving tree branches that are aligned to create a mass of plant material, creating a knit look, tunnels, and arbors.  When we traveled to Canada once, we visited a garden in which pleaching had been used to create a path much like the one in the picture.  I don't know what type of tree it was, but its flowers were yellow, and the day we were there not only were the lovely flowers blooming in the branches, the blossoms had begun to fall, and walking through this tunnel of trees was like being rained on by gold.  It was one of those rare moments of being someplace at just the right time to experience magic.
Pollarding involves removing branches (6 to 8 feet high) to create a full top of foliage and branches.  The picture at left shows such a tree in winter, when it has no leaves, but in summer, when the tree is filled with leaves, it is like a bouquet of leaves held in the grasp of the bare branches below.  Pollarding helps maintain trees at a specific height, such as you might want to do with trees lining a street. 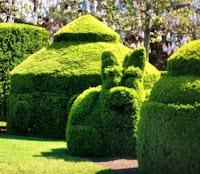 The last two examples of man's hand in the growth of trees demand artistry and patience--as Pooktre obviously requires as well.  Probably the most amazing display of Topiary I have ever seen was at Longwood Gardens.  Forms and animals are created by gradually trimming hedges to become a desired shape.  I once saw a picture of a lawn with a series of topiaries, in the lead a fox, and chasing the fox several topiary hounds running after him.  Of course, because hedges constantly grow, maintaining the shapes requires constant trimming. 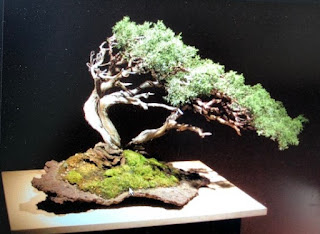 In contrast to the speed of growth that requires regular attention, Bonsai requires the opposite.  Growing a mini tree in a pot to mimic its shape in nature through special pruning requires patience.  Shrubs can also be used for creating Bonsai, which would allow a shorter time in which to reach a desired appearance, but shaping a tree grown in a small container to stunt its growth could take a lifetime.  The magnificent example at left must have taken years of careful training and clipping to give the appearance of an ancient tree along a rocky shoreline with prevailing winds constantly directing its grown inland.
I wonder if Isaac had ever heard of such manipulations of plants.  Perhaps his large library pictured such things, and if so, I would suspect his remarkable curiosity would have tempted him to give it a try.  He obviously had the skill to plant and nurture trees, which he writes about in his journal.  He was an inventor, and I find it hard to believe that if he had known about some of the ways to train trees mentioned in this blog he could have resisted.  Even if he had not tried topiary or bonsai, he might have experimented with  pleaching or espalier of his fruit trees to get the advantage of sunlight or protection from strong Kansas winds.  I believe Isaac would have loved the challenge!