She Didn't Marry a Farmer 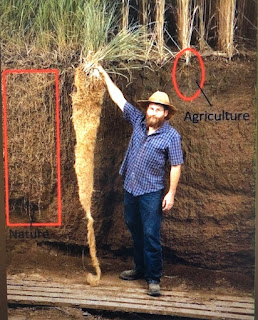 Continuing last week's blog that shared 3 generations of women who married a famer and concluded with a husband who married a farmer's daughter, I will remind all of us that while it may be true that young women today may be choosing farming for themselves, they are far from the first Female Farmers!
The Homestead Act of 1862 identified "heads of households" as the family member allowed to stake a homestead claim.  Since husbands were always the ones considered as the head of the family, married women could not stake a claim unless they could prove that their husband did not provide support for them in any way.  That was often difficult, since even the worst of husbands usually managed to bring home some bit of revenue occasionally.

The picture above right compares the roots of prairie grass that the homesteaders had to break through to plow their fields for crops to the shallow roots of cultivated grass.  Breaking the native prairie sod was no easy task for male or female farmers!

Single persons, male or female, could stake a claim to prove up, as could widows and divorced women.  Adjacent to Isaac Werner's timber claim were two such women.  Persis Vosburg lived across the road to the west of Isaac's timber claim.  She had never married, but she had her own home and staked the quarter section on which it set.  Her widowed brother's claim was just to the north of hers.  She helped take care of his motherless children and he helped with some of her farm work in exchange.  A neighbor, coveting her land, raised a complaint that she was not complying with the requirements of a homesteader.  Isaac spoke up for her, saying that if two brothers had claims side-by-side and shared work, no one would object.  The fact that the work she did for her brother involved childcare should be treated no differently than the case of two brothers sharing work.  Persis was allowed to prove up her claim.

Just to the east of Isaac's timber claim was a divorced woman with children who had staked a claim.  No one seemed to object to Isabel Ross staking her claim, since it was obvious that she was supporting herself and her children.  Isaac often did simple kindnesses for her, including hiring Isabel and her children occasionally to help with his potato crops.

Perhaps the most famous female homesteaders are the four Chrisman sisters, Hattie, Lizzie, Lutie, and Ruth, who all staked claims in Custer County, Nebraska in1886.  They were not alone.  Historians today have estimated that about 20% of the homesteaders in Nebraska, Kansas, Colorado, Wyoming, Montana, North & South Dakota, Utah, and Idaho were single women.  Not every person staking a claim managed to endure the hardships of survival or the loneliness and hard work, and many claims were abandoned.  However, the success rate for proving up their claim was higher among women than men.

These brave, resourceful, stubborn women homesteaders were generations ahead of the Pioneer ad that inspired last week's blog, which is continued this week.  In the book "Letters of a Woman Homesteader," a widow with a young daughter decided to stake a claim.  Her Pastor advised her to "get a position as a housekeeper for some rancher who would advise [her] about land and water rights."  As you might guess, the widow and the rancher didn't quite stay single for five years, but she maintained her own land and he continued paying his bride the housekeeper wages he had paid before their marriage, so that she had her own money for maintaining her claim.  The government accepted the arrangement and awarded her the land at the end of the required 5 years.  Isaac Werner's neighbor ladies Persis and Isabel had no such romantic entanglements and proved up their claims 'by the book.'  Perhaps for some of these ladies, a man may have come along after her hard work of proving up a claim and asked for the lady's hand in marriage.  I'm not sure whether these ladies would have accepted a marriage proposal after proving they could manage on their own, especially since the laws of their time would have taken away some of their rights if they married!

But, like the woman in the Pioneer ad that inspired the two blogs starting last week and concluding this week, perhaps some of those homesteading women could eventually say "Her husband married a farmer."