The Larned Opera House and the Ghosts of Past Performers

As the razing of the 1886 Opera House commenced its final performance, the stage became an outdoor theater for the first time, a gaping hole in the center of the wall where the stage had been.  On the west side of the stage, old posters advertised the entertainments of the past, and my imagination focused on the image of the Victorian actress with her pompadour hairstyle.  Was the ghost of the actress hiding somewhere inside the undemolished part of the opera house, or had she moved on with the rest of the cast as the train carried cast, costumes, and sets to their next performance somewhere down the line?  The sight of the demolished Opera House could not help but stir my imagination. 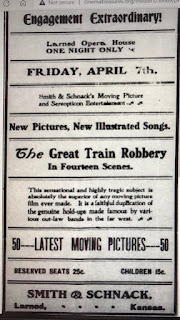 While I do not know the name of the girl with the pompadour hairstyle, nor the name of the play in which she may have performed, I do know, thanks to the advertisement for The Great Train Robbery at left, that the now famous movie did play in the Larned Opera House.
That movie has become legendary, claiming many titles, some of which it does not deserve, such as the claim that it was "the first western" and even the "first story film," neither of which is accurate.  However, The Great Train Robbery was a   wildly popular movie.  It was not a movie as we think of movies today.  As the Larned ad states, "new pictures" and "new illustrated songs" have been added, and this was possible because the pictures themselves did not move.  The story line and the music tell the story, with fixed images appearing one after another on the screen.
The iconic image from this movie is of actor Justice D. Barnes pointing his gun directly at the camera and firing.  The frightening impact on the audience was the sense that a man had suddenly appeared and shot them!  Interestingly, the theater had the option of using the picture of Barnes firing into the crowd at the start of the firm or at the end.  Either way, apparently it created a sensation with audiences!
Although the pictures were still, some were hand colored, for example with puffes of smoke.  While we have become jaded by the amazing special effects in today's movies, for those early theater goers, the sound and the surprise were enough to frighten them.
The next time you approach the corner of 4th Street and Broadway the Opera House will no longer be standing, and perhaps even the pile of rubble will have been taken away.  Yet, there will still be a few people who remember the old Opera House, maybe even a few who remember it before its sad decline.  Gradually most of the old opera houses have disappeared.  Even many of the movie theaters that followed them are disappearing.  Yet once, the Larned Opera House was the Price of Larned! 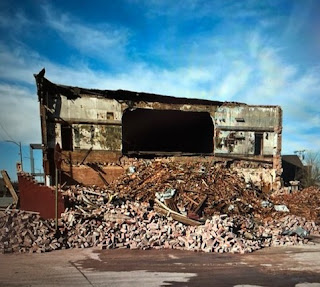 P.S.  I have blogged about other Kansas Opera Houses.  You may want to do a search to discover those previous blogs.