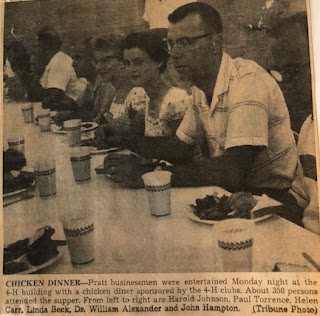 The Pratt Pride magazine of 1962 devoted a large article to the role of 4-H Clubs in Pratt County, consisting at that time of 356 young members among 12 organized clubs throughout the county, with 96 adults involved in leadership posts.

The first 4-H memberships in Pratt County, organized in 1927, by 1962 had involved 6,331 boys and girls, although technically the early clubs were called "Project Clubs."  Those organizations became 4-H Clubs in 1931.  Each community could decide the projects their club would offer.  While rural clubs might focus on livestock and poultry, clubs with more urban members might focus on other projects.  In either case, the rules required that the young members do most of the project work themselves and keep their own records.

The clipping at the beginning of this post appeared in the "Pratt Tribune" showing the chicken dinner hosted by the 4-H clubs for Pratt Businessmen.  Notice the reference to "business men," although there must have been several business women in Pratt at that time.

I did not have livestock.  My projects were cooking, sewing, and home improvement.  I do recall giving a demonstration describing how to select items for a first aid kit, which I carefully packed into a tin lunch pail.  I also remember the emphasis on learning how to conduct a meeting with the proper motions, seconds, and voting.  As an adult sitting through a few meetings, I sometimes wished those adults conducting the meeting had benefitted from the same 4-H training I had received. 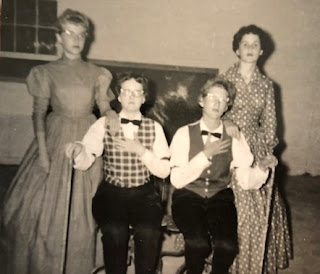 Our club particularly enjoyed music, whether it was square dancing or singing.  The quartette pictured at right consisted of four Byers classmates--Helen, Judy, Cheryl, and Lynda.  Our serious pose was intended to depict a Barbershop Quartette.

I also remember the dances at the fairgrounds, with 4-H members from all the clubs in the county attending.  I think we learned the bunny hop and the schottsche, as well as various square dances, but whatever the dances were, we had fun.

This past Christmas we were surprised by a knock on our door one evening for the delivery of a Christmas ornament decorated by the local 4-H club.  The traditions live on!

Growing up in rural Kansas I learned a lot of useful things as a 4-H club member. Sewing was my main project but I did have a Jersey calf which I was never brave enough to show at the county fair. Had good wholesome fun at the fair though and also at summer 4-H camps. It was and I hope, still is, a worthwhile organization.