Isaac Werner lived before the automobile, so his equivalent love affairs were with his horses, particularly with Dolly Vardin, the little gray mare he bought for $115 and named after a Charles Dickens character.  In order to pay for her and borrow enough to buy other things he would need, now having a horse, he recorded in his journal:  "I took loan at $350 at 10 percent and straight on my homestead for 5 years, interest due every six months."

Recently my husband Larry saw an article about a young woman, Gail Wise, who bought the first Mustang automobile sold in America.  She was fresh out of college, and from the picture, a cute young lady, and apparently the dealer was charmed by her, since he was not supposed to even show the car, let alone sell this car being introduced with a big publicity build-up that required keeping the design secret until the unveiling on the same day across the nation.  Ignoring the prohibition about showing or selling the car, the dealer sold Gail Wise her Skylight Blue Mustang Convertible on April 15, 1964 for $3,447.50. 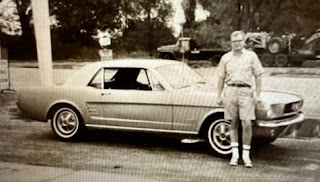 She was not the only one to fall in love with the new Mustang.  Larry and I had taken his high school car off to college, and he had decided it was time to trade.  We were only a few months from college graduation, and the 'Man' of the house at 19...still a few weeks from 20...had decided we didn't need to wait until graduation for a new Mustang.  Debt free until then, Mrs. Fenwick was not pleased with her husband's decision, but when they traded his high school 1956 2-door Chevy, that they took to college for a brand new Tahoe Turquoise V-8 3-speed manual transmission Mustang, she loved it!

Larry had negotiated the purchase  through our hometown businessmen, buying it from George Asher Ford in St. John and financing it from a Macksville Bank.  With Officer Training School ahead of him, and four years in the Airforce, he and the banker were confident that the loan would be repaid.

When we drove from Hays to St. John to get the car, we invited our close friends from college, Verlin and Betha, to ride down with us and return in our new car.  Larry recently  shared his memory of that day with Betha, which she remembered clearly, and she replied with her own family's love affairs with a series of Volkswagens through 2 generations.  Most of this blog is borrowed from Larry's memories and Betha's reply.  Thank you to both of them!

The iconic 1960s Mustang was a dream for many of us. Glad you made yours come true