Benefits of a Land Acknowledgment 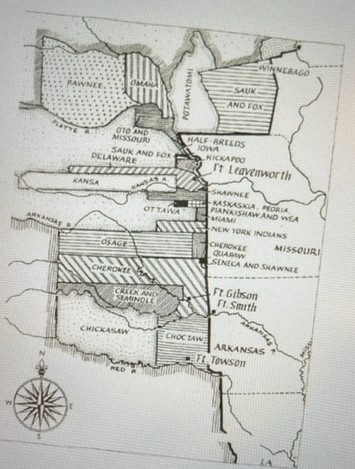 As well as learning a bit about reservations in Kansas, I also learned that Kansas has a Native American Affairs Office opened in the summer of 2011 to serve as the Liaison for the Governor.  It is intended to ensure that Native American concerns and needs are addresses in state policy making decisions.  I was not aware of that, so it is another thing I learned in my research.

Do you know that Haskell opened as the United States Indian Industrial Training School, with the purpose of educating American Indians and Alaska Natives, focused on elementary grades, but soon expanding through high school, and by 1970 adding a junior college curriculum?  Today it is known as "Haskell Indian Nations University" with an average enrollment of over 1,000 culturally diverse students each semester.  In conjunction with the University of Kansas, Haskel students may complete M.A. degrees, joint M.A./J.D. degrees with KU Law, as well as other provisions for undergraduate minors, non-degree courses, and other admission opportunities.

Not only KU, but also Kansas State University has a program in cooperation with the Kansas Association for Native American Education (KANAE) to provide guidance for teachers who might not otherwise be sensitive to actions hurtful or embarassing to Native American students. I enumerated some of those things in last week's blog.  Another program, through the college of Veterinarian Medicine at K-State, encourages Native, Indigenous, Tribal, and rural Kansas students to consider Veterinary medicine as a field of study.

These are all things about which I became better informed because of my interest in what Land Acknowledgments might accomplish.  One of the things Land Acknowledgments are intended to do is share information with others, and through my blogs, perhaps I have done that.  Now, if you attend a meeting and the moderator begins the event with a Land Acknowledgment you will understand its purpose.

Did you notice that ALL the reservations you show on the map are of eastern American tribes? How many reservations are east of the Mississippi River?
Also South Africa came to Canada to learn about apartheid as we had so successfully and systemically shut our First Nations out of our lives? They went home and institutionalized it.
We are just now coming to grips with the tragedy of our residential schools and counting the unknown number of unacknowledged dead children buried in unmarked graves on the school grounds.