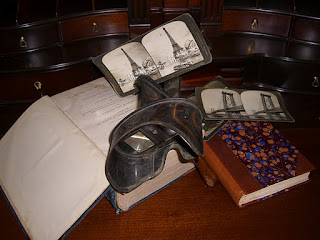 I immediately formed a kinship with Isaac because of our common love for books. When Isaac's Journal begins in December of 1870, he is a druggist in Rossville, Illinois, in his mid-twenties. He is prospering, with every bit of money he can set aside spent on books, views for his stereoscope, and portrait cards of famous people that he kept in albums. He had a curious mind that he wanted to fill with the writings of great authors, pictures of the world, and images of important people, and he was determined to build his collections, despite being criticized by some of his less literary friends. About the money he spent, he wrote in his Journal: "Some get rid of a good deal [of money] in horses and buggies, great many in whisky, and how many on women? Ike [Isaac] fools good deal away in Books and Views and Pictures." That is not to suggest that Isaac wasn't keeping his eyes open for a well-educated young lady. He tried charming one young miss by loaning her some of his art books, and he paid particular attention to a bright young bookkeeper at Henderson & Lee's store, the first female employed in that position in town. He was also quite interested in a young woman who played chess and appreciated music, but unfortunately for Isaac, none of these relationships matured into a romance.

From his successful business he had assets he could have invested or loaned at profitable rates of interest, but instead he continued to buy books, explaining in his Journal: "How interesting and delightful such reading is and the daily increase in familiarity with such noble literary monuments. When I think back over all my best investments yet made, what I done [sic] in good Books I must consider the Master stroke of all. What a permanent and ever increasing value does such an investment bring..." 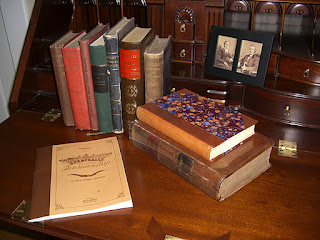 These words were written when he was young, but even during the hard times as a homesteader on the Kansas prairie, he treasured his books and added to his library occasionally. Most of the later additions were of a practical nature and often pamphlets rather than beautifully bound volumes, but he never doubted the value of books. Isaac would have agreed completely with Barbara Tuchman, who wrote, "Books are the carriers of civilization. Without books, history is silent, literature dumb, science crippled, thought and speculation at a standstill."

Many of the books in Isaac's library are still read today--Mark Twain's Innocents Abroad, Gibbon's History of the Roman Empire, Adam Smith's Wealth of Nations, Edward Bellamy's Looking Backward, Cervantes's Don Quixote, monthly issues of "Scientific American" which he had bound. He also collected books of art, philosophy, engineering, law, economics, political theory, logic, travel, and languages. He had reference books about Shakespeare, the Bible, and Dictionaries of words, authors, and artists. Among them all, he seemed to love Shakespeare best. I can picture Isaac sitting in his early dugout, before he had built his house and still lacking a horse to ride to the nearest town, reading Shakespeare by lamplight.

I was so curious about the books Isaac read that I went to some of my favorite used book websites and ordered the oldest editions I could find of titles he had mentioned. I guess you might say that Isaac and I formed a book club! Pictured are the following: Progress & Poverty by Henry George, Twain's Innocents Abroad, A Comprehensive Dictionary of Organ Stops, Classical Antiquities, Cuba with Pen & Pencil, Theory of Spencerian Penmanship, Bain's Logic: Deductive & Inductive, Cooper's Justinian, and The Culture Demanded by Modern Life. The books on art and travel that I would have particularly enjoyed could not be found, but the sampling I read impressed me with Isaac's thirst for knowledge. Surely you can understand why I must tell the story of this remarkable man!

[The stereoscope and views in the photograph belonged to my ancestors. I do know from Isaac's Journal, however, that he visited my great grandparents, Aaron & Susan Beck, and shared his stereoscope views with them.
Posted by Lynda Beck Fenwick at 9:17 PM

Yes, bonding with someone who loves books like that is very understandable. Finding old copies of the books Isaac read is pretty special. Thanks for the Tuchman quotation; she is one of my favourite authors.
When I moved to Ukraine, leaving behind my books was the hardest part. I was able to bring maybe 25% over time but half went to the kids and the rest to strangers.

I love books and reading, too, so Isaac and I would have been kindred spirits as well. Thanks for another interesting glimpse into his life!

Parting with a much loved book is about like saying good-bye to a friend. I'm not sure an e-book can generate the same feelings...

Most of your weekly posts have that one or more sentence that keep the raw emotion of Isaac's work, and yours, ever forefront in the reader's mind. When you successfully tie that connection...between his life and your reaction to his writings...then you and Isaac become almost the same person. That's when the story becomes most interesting! When you finish your book, I hope many pages and chapters leave the reader with that "completed" feeling. Keep writing!