Are you one of 93 million descendants? 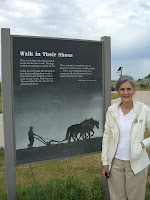 Isaac B. Werner had no descendants, but many homesteaders raised families.  Today it is estimated that 93 million people are descendants of homesteaders.  I am among that number, and perhaps many of you following my blog are too.

This past weekend my husband and I attended the 57th Annual Willa Cather Spring Conference in Red Cloud, Nebraska, and I will be sharing that great American Writer and her hometown with you in future posts.  However, I mention our trip to Nebraska to share some side trips we took after the Conference.

The Homestead National Monument operated by the National Park Service is located near Beatrice, Nebraska, northeast of Red Cloud.  We enjoyed the drive through some of Nebraska's beautiful rural landscape and realized only when we arrived at the national park that it is the 150th Anniversary of the Homestead Act of 1862. 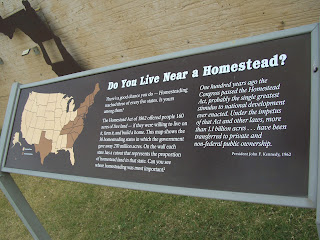 Those of us who know the Great Plains region tend to think of homesteading as having occurred on the plains, overlooking the extent of America opened for settlement by homesteaders.  Upon arrival at the park site, visitors are immediately presented with the question:  "Do you live near a Homestead?"  A map shows that there were 30 homesteading states, although in 1862 when Abraham Lincoln signed the Homestead Act, not all of the territory had yet achieved statehood.  According to the park ranger who greeted us, Montana is the state with the largest homestead acreage, and Nebraska is the state with the largest percentage of its land having been homestead.  Kansas, where Isaac homesteaded, also has a great homesteading heritage. 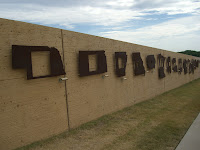 As visitors approach the Heritage Center, the sidewalk parallels a wall showing the 30 homesteading states, with a box cut from each state's silhouette representing the proportion of that state's total area that was available for homesteading.  The photograph taken looking down a portion of the wall shows Nebraska at the far left, with Kansas next in the line of state silhouettes on the wall. 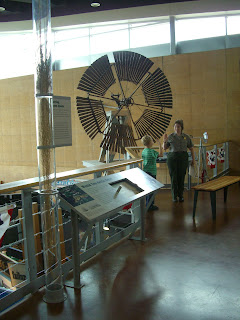 After an informative conversation with the ranger, we viewed the film and walked out just in time to see a Junior Ranger being sworn in.  It was great seeing how seriously the young man took the responsibilities he was assuming with his oath to learn about the prairie and help care for it and teach others to respect the land.  Notice particularly the tall Plexiglas tube on the left side of the photograph.  A bunch of prairie grass has been carefully extracted from the soil to show the blades of grass above the surface (above the top band on the tube) but also the length of the roots extending deeply into the soil.  Grass such as this formed the sod that homesteaders plowed to clear the land for cultivation of crops.  I will never again think that the common garden weeds that I pull have deep roots!

Isaac staked his claim in 1878, and it was not until 1886 that he finally bought a horse, having avoided the indebtedness necessary to purchase a horse until that year.  During his early years of farming, he traded his own labor in exchange for help from neighbors with horses and machinery to break the sod. This exchange of labor allowed him to break so little sod that much of his time was spent raising trees rather than planting fields.  Even when the sod was broken, he had to use hand tools for farming the ground. 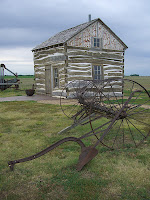 The implements displayed near the homesteader's cabin on the grounds of the Heritage Center are those pulled by horses, mules, or oxen; however, at the Education Center the exhibit included man-powered implements like Isaac initially used.  When we arrived there, I spotted the sign directing visitors to that exhibit.  "Oh, look!" I exclaimed.  "This is where the farm implements are!"  I noticed two rangers exchanging perplexed expressions, and I said, "I suppose that is not something you usually hear from the women visiting your exhibits."  They laughed and nodded.  They had no idea that it was my time spent with Isaac that had caused my enthusiastic response to the opportunity to see the implements he used on his homestead.  In a future post I will share pictures of some of the implements I photographed.

Not only the Homestead National Monument has wonderful events planned throughout the summer commemorating the 150th Anniversary of the Homestead Act of 1862 but also the Nebraska Humanities Council is celebrating their state's homesteading legacy.  It is a great year to visit Nebraska, and when you do, be sure to include the Willa Cather Memorial Prairie and Willa's hometown of Red Cloud in your planning.  http://willacather.org/; http://nebraskahumanities.org/; and http://www.nps.gov/home/planyourvisit/150th-anniversary-of-the-homestead-act.htm.

Lynda, I am one of the 93 million decendants. My gggrandfather John Koch homesteaded land west of St. Benedict, Nemaha, Kansas.
Donna Koch Beck.

Donna, So, your children are descendants of homesteaders on both the maternal and the paternal sides--Aaron and John.

Much of the farm land in the Canadian Prairie Provinces (Alberta, Saskatchewan, Manitoba) was settled by homesteaders. The land was surveyed from the Red river west to the Rockies beginning in I think 1865 in time for an influx of Mennonites from Ukraine in 1870. My grandfather and two of his brothers took homesteads in 1906 when they came from Ireland.