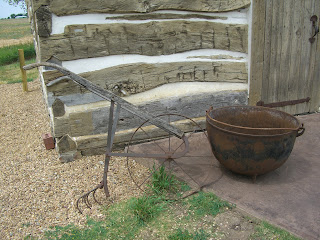 Our visit to the Homestead National Monument near Beatrice, Nebraska, allowed me to see some of the implements Isaac may have used, particularly those he used in the early years after his arrival in 1878 before he had a horse.  A walking cultivator is displayed at the Palmer-Epard Cabin which was moved from a nearby homestead.  The homes in Stafford County, Kansas, were not so grand, for there were no trees for wood and little adequate clay for bricks or chinking between timbers, so they made their early homes from sod. 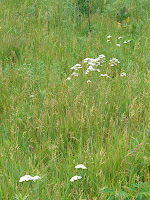 Because the original settler had cleared the land for crops, when the National Park Service acquired the land on which the first homestead had been claimed under the Homestead Act, they had to recreate the vegetation of the original prairie.  Isaac probably did not find the same grasses on his prairie homestead in Kansas, the tall grasses less prevalent further south.  Even so, imagine trying to break the sod without a horse or oxen to help.  To maintain the healthy prairie environment, the Rangers burn one-third of the park acreage each year, emulating Nature's prairie fires. 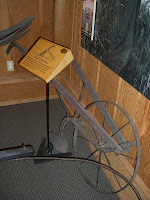 Among the implements on exhibit is a hand cultivator with a plow blade, rather than the forked tongs in the picture at the top of this post.  When Isaac traded his own labor in order to have a neighbor break sod for him with their horses, mules or oxen pulling the plow, even the turned sod with ancient roots imbedded in the soil would have been extremely difficult for Isaac to cultivate by hand.  Yet, hand tools were all that Isaac and many settlers had available to use without horses of their own. 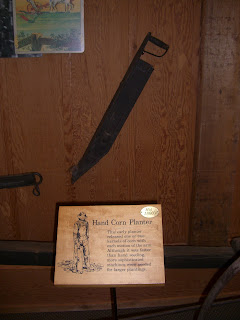 Once the ground was prepared for planting, these farmers who were dependent on their own manual labor, like Isaac, used hand planters, the one pictured being a hand corn planter.  Isaac's journal is filled with detailed records of his experiments regarding how many kernels to plant in each hill, the best date for planting, how far apart to make the hills, the spacing for rows, and the importance of making straight rows to facilitate cultivation of the growing corn. 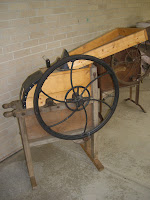 Not all of the corn was planted in plowed soil.  In the early years, Isaac and many others planted "sod corn," planting hills in the midst of the prairie grasses.  The yield was not particularly good, but they managed to raise enough to supply their own needs.  Today's combines not only cut the stalks but also separate the ears from the stalks and the kernals from the cobs.  Isaac did that by hand, making use of the stalks for fodder or using the dried stalks for fuel in his stove, along with twisted husks and the cobs, once the corn was removed.

These photographs offer some understanding of the hard, physical labor required to create farms on unbroken land, the stubborn grass roots resisting the plow.  Only 40% of the settlers staking their claims endured the hardships and labor required to prove up their land and receive a patent from the government.  It is easy to understand why so many did not survive the difficult task, some giving up their lives in trying, others just giving up.﻿

I cannot imagine trying to farm without any power other than one's own muscles, especially as you say, breaking sod. My hat is off to Isaac and all like him.

Farming techniques are so different now with agribusiness and mono-cropping.