Married to a Farmer 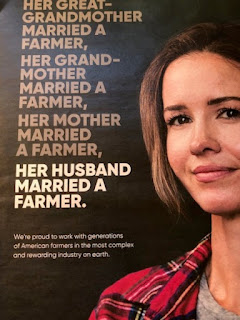 In gratitude to the many people who follow this blog, I have shared history and other topics weekly for nearly 550 blogs.  It will probably not surprise you that I am constantly on the lookout for interesting subjects, but so is my husband.  Recently he handed me a page torn from a magazine, with an ad from Pioneer.  The text read:  Her great grandmother married a farmer,  Her grandmother married a farmer;  Her mother married a farmer,   Her Husband Married A Farmer.  Beneath that was this sentence:  "We're proud to work with generations of American farmers in the most complex and rewarding industry on earth."

"Do you think you can make a blog out of that?" my husband asked.  "Probably," I replied.  Actually, it was easy!  Thank you to Pioneer for the idea.  They inspired me with the quote from the upper corner of the ad pictured at the top of this blog, which reads:  "We're proud to work with generations of American farmers in the most complex and rewarding industry on earth."

Living in the farmhouse of a 4th generation family farm, all I needed to do was consider my own ancestry.  My great grandmother, Susan Beck, was a pretty young teacher when an older fellow, who had put marriage aside to help support his parents before serving 3 years in the Union army and working for a while after returning from the war, spotted the young teacher and asked her to marry him.  By the time he went to Kansas to stake both a homestead and a timber claim, they had two young children, which Susan brought with her by train to join her husband.  When a stroke disabled her husband, Susan stepped forward, taught school, helped neighbor ladies with medical needs, and bought a quarter-section of land with her son.  Her role in their marriage went beyond being "a farmer's wife."
My grandmother raised a family of seven.  The house we now live in had no electricity nor running water inside the house, but the pump on the enclosed corner of the porch provided the water she needed to fill the tank in the iron stove every morning to keep warm water available through the day--once she got a fire going in the stove first thing in the morning!  I don't know how much was delegated to her children and a full time hired man, but although she never managed to learn how to drive a car, she was said to be able to harness a horse to a wagon as fast as any man.
My mother was the 3rd generation, and while her role was more domestic, no one should minimize the importance of her summers of canning what was raised in the garden, providing shelves in the basement filled with enough canned tomatoes, green beans, and cucumbers, as well as jars and jars of sand hill plumb jelly to last until the next summer's garden.
And finally, the 4th generation comes down to me.  I have done some gardening since we moved to the farm, but not every year.  I do make enough sand hill plum jelly to last through the year, if late frosts don't ruin the harvest.  I can't really claim to be a farmer, but I certainly can claim to be a Farmer's Daughter.
More history about female farmers next week!

There are more and more women actively engaged in farm operations. Brain power has replaced muscle power so the traditional division of farm work is no longer that important. Women in professional agriculture fields are recognized for their knowledge by even traditional farmers. All in all a good thing. Happy New Year, Lyn.