Thank you to the Lucille M. Hall Museum volunteers who supported my efforts in sharing Isaac's Journal by recognizing me at the Victorian Tea this past Sunday and by encouraging people to visit my blog. I attended with Sandra, Courtney, & Bailey again this year, and we plan to make it an annual event. 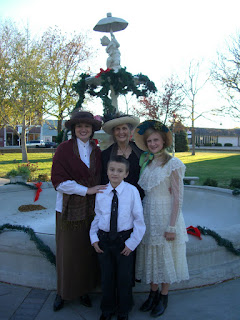 Afterward, we walked over to the park, which has been decorated for Christmas early for the particular pleasure of those attending the Tea. When St. John was founded, the St. John Town Company had one square block surveyed as a town square. In 1882 the land was deeded to the Stafford County Board of Commissioners, and after some disagreement over whether the space should be used as a park or the site of the courthouse, the courthouse was located on the southeast corner across from the open square and the center of town became the park. Real beautification began after the turn of the century, and on October 17, 1913, the fountain was dedicated in memory of Tom Mosely, the man who had played such a significant role in creating the beautiful space it remains today.

Isaac would not have seen the landscaping as it exists today, but as I posed by the fountain in my Victorian costume after the Tea, I certainly felt transported to Isaac's era. Thank you to everyone who expressed their interest in Isaac and my book, and I hope you visit my blog regularly to read my progress and add your comments.
Posted by Lynda Beck Fenwick at 9:48 AM