On the 23rd of May, 1844, twin boys were born to William and Rebecca Werner, the couple's first children. Just over two months later, on August 4th, the baby boys were baptized at St. John's (Hain's) Reformed Church in Lower Heidelberg, Berks County, Pennsylvania. One of the boys was named Henry Beckley Werner; the other boy was named Isaac Beckley Werner, both boys having been given their mother's maiden name as their middle name. The church in which the babies were baptized was the center of their community, built on a hill said to be the highest point in Lebanon Valley.

The boys' parents had married in November of 1842, when William was forty-one years old and Rebecca twenty-five. The year the twins were born, William built a two-story limestone house for his family on the fifty-two acre farm he owned. In 1855, with two surviving daughters added to the family (one daughter having died as an infant), William hired a surveyor to plat a town on twenty-two acres of his farm. He used family names for the streets--William, Werner, Rebecca, Beckley, and Reber, his mother's maiden name. It is believed that part of the consideration for granting the Lebanon Valley Railroad passage through the platted town was requiring that the depot built by the railroad be called Wernersville. 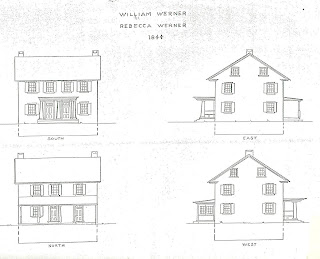 Isaac and his siblings grew up in a community with many aunts, uncles and cousins living nearby. Schooling for children had been provided by the Hain's Church in earlier years, but when Isaac and his brother were five years old, Lower Heidelberg erected its first public school building. In 1861, Isaac and Henry were seventeen years old and still attending school, offering some indication of the importance their parents placed on giving their children a good education. The teacher, Francis Trout Hoover, taught seventy-two students, the youngest age 4 and the oldest age 17. Over three decades later, Isaac's old teacher published a book titled, Enemies in the Rear, or a Golden Circle Squared, about a community modeled after Wernersville. The plot of Hoover's novel involved a secret society of draft resisters during the Civil War, and locals said of the book that it was probably based on two-thirds fact and one-third fiction. Historians agree that there was organized draft resistance in that region of Pennsylvania. Neither young Isaac nor Henry served during the Civil War, but Werner cousins did fight to preserve the Union. 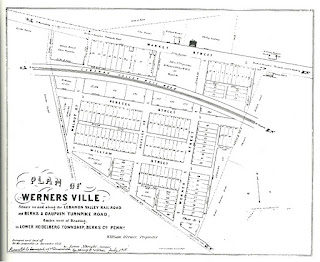 Isaac's father William died on June 13, 1865, and Isaac left soon after with an older cousin who had been a Union soldier during the Civil War. Eventually both cousins ended up in Rossville, Illinois. By 1878 Isaac was homesteading in Kansas. No record was found to indicate that Isaac ever returned to his home of Wernersville after leaving in about 1865. 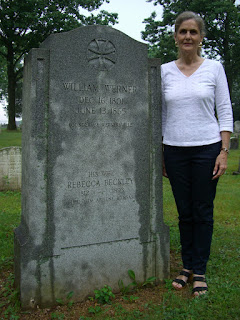 Richard Bach wrote: "The simplist questions are the most profound. Where were you born? Where is your home? Where are you going? What are you doing? Think about these once in a while and watch your answers change." Isaac Werner knew where he was born. At different times during his life he changed locations and occupations, and sometimes imagined moving on, even after he seemed to have settled on the Kansas plains, so his answers to the last two questions Bach suggested would definitely have changed. What I cannot know is how he would have answered the second question--Where was Isaac's home? Was it back in Pennsylvania where he was born and raised, or was it in Rossville where he kept for many years the lots he had bought, or was his heart on the Kansas prairie where he had staked his claim and built a beautiful farm of which he was deservedly proud?

What I do know is that Isaac was an intriguing man. He read widely about history, the Bible, the arts, philosophy, engineering, law and business; when he could not find equipment to do the job for which it was purchased he modified it or invented something better; when he learned of the illness of a neighbor boy, he intervened and probably saved the boy's life; when he observed the world around him he recognized its changing nature and photographed the present to preserve it.

It is always beneficial to start at the beginning, so I have included this post of Isaac's beginnings to help you appreciate the posts about him which will follow.
Posted by Lynda Beck Fenwick at 3:09 PM

In reading the inscription from the Werner headstone I note that Rebecca is buried in Abilene, Kansas? We assume you will tell us more about this family connection between Pennsylvania and Kansas and why Isaac's mother was not buried next to her husband and is buried in Kansas. Appears to be a very nice house the Werner's built in "Wernersville" Detailed research on your part. Still interesting!

I love the Richard Bach quote - so simple yet insightful. I may have to borrow this. Love this post. I can see your blog will keep me from my own writing:) Talya