I can see Isaac's farm from my house

When I began transcribing Isaac's Journal, I did not know where his homestead and timber claim were located. Eventually, he included the legal description, identifying his land as being in Clear Creek Township. Since that is the township to the west of my childhood home, I was pleased to discover he had lived so near. Later, I learned that his home was even nearer, for the original Clear Creek Township had been divided in half, the west half retaining the name but the east half being given the new name of Albano Township. Isaac lived one mile straight east of my childhood home! 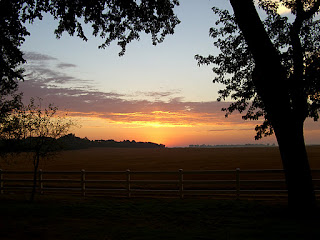 Standing at my front door, I can see the trees that are currently on what were Isaac's homestead and timber claim. While these trees may not be old cottonwoods that he planted, they are quite likely to have grown from seeds dropped by trees Isaac started from cuttings on the treeless prairie that existed when he arrived. The sunrise photograph, taken from my front yard, shows Isaac's trees to the right of the rising sun, bathed in a purple morning haze at the edge of the horizon. The mid-day photograph, also taken from my front yard, shows the same row of trees, located on the east edge of Isaac's old timber claim. 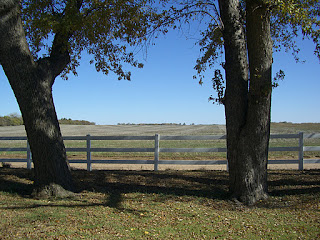 In 1878 when Isaac arrived, there were no trees on the prairie. A "timber claim" did not designate land covered with trees but rather land that could be claimed by planting ten acres of prairie in trees and keeping them alive for eight years in order to claim the title. If drought did not kill them, weeds did not choke them, pests did not destroy them, and prairie fires did not burn them during the required eight years, the settler could acquire 160 acres. As Willa Cather wrote about the hardy trees that managed to survive on the prairie, "I like trees because they seem more resigned to the way they have to live than other things do." In addition to acquiring land as a timber claim, 160 acres could also be claimed as a homestead by building some sort of dwelling, living in it for five years, and improving the land by gradually breaking the thick prairie sod and planting crops or grazing livestock on the prairie grass.

The land was divided into square mile sections which contained 640 acres. These squares were then divided into four smaller squares, each containing 160 acres and being one-fourth of a square-mile section, or a quarter-section of land. These were identified by the compass direction they occupied in the full section. Isaac's homestead was in the southwest quarter of the section; his timber claim was in the northwest quarter of the section. Other homesteaders claimed the quarters in the eastern half of that section.

Today there are roads around most square-mile sections, and fences or changes in the crop from one farmer's field to another's usually make it apparent where one quarter section of ground ends and another begins. In Isaac's day, there were not so many roads, although farmers did mow along the edges of their property for two reasons: to make travel easier and to create fire guards to slow prairie fires.

If you could have viewed Isaac's farm from the air in 1888, you would have seen neat tree rows around 30 and 40 acre fields and carefully maintained fire guards mowed or plowed around his property line. The view from the air is very different today, and I will share it with you in next week's blog.
Posted by Lynda Beck Fenwick at 4:29 PM

I have wondered, but never researched, what the words "timber claim" meant. Thanks for the description. You have me hooked on learning about Isaac too! Thanks for sharing your addiction.