The photograph at right clearly shows the layering of sedimentary rock in the Natural Bridge near Sun City taken prior to its destruction.  It also shows how water gradually cut an opening in the rock to create the bridge.

Many beautiful formations can be found in the United States.  The picture at left, taken from below with the camera aimed skyward "Inside Lower Antelope Canyon" by Moondigger, shows the effect of erosion by wind and water that has exposed the elegant sculpturing of layers of sandstone.

Others of you who follow the blog regularly will also remember my posting of photographs taken of Castle Rock and surrounding outcroppings in that area of northwestern Kansas.

My fascination with sedimentary formations caused me to see one particular circumstance in a geological manner, rather than observing it for what is actually was.

Use your imagination to picture the "mountain range" at right as a sedimentary formation, laid down layer by layer.  That is exactly what I did for a split second as we drove by a Kansas field.  Of course, what I saw was not a mountain range built up layer by layer over eons but rather piles of grain unloaded side-by-side by a Kansas farmer who must have found himself lacking granary storage space.

While it may not have been a mountain range, it was beautiful and offered an interesting comparison of how different materials deposited on top of each other over many eons created the sedimentary rock formations we see today in such places as those pictured above. 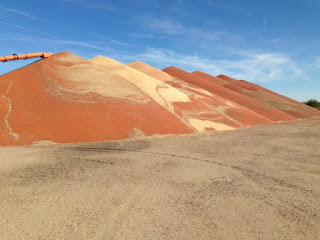 The photograph at right shows the grain auger used to transfer the grain from the truck that brought it to the site onto the cleared area on which the grain is being temporarily stored.

The last image shows more closely the layering resulting as the auger deposits the grain on the pile, truck load by truck load.

Beauty is all around us, and with a little imagination, what we see can transport us to imagined places--a wind-shaped canyon, a far-away desert, a distant planet! 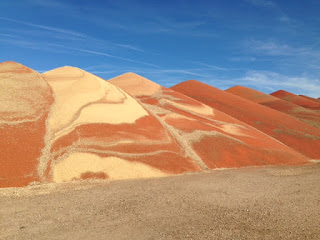 Posted by Lynda Beck Fenwick at 8:37 AM

Sharing some of the comments I have received: SG from MO, "We have rented grass north of Scott City and there is a formation called Chalk Pyramid...[I] enjoy your blog." RPG from TX, "Beautifully imagined and delightfully described. Well done." TT from TX, "All the years I lived in Kansas I never made it to see the Natural Bridge or the rock formations in northwestern Kansas." JK from KS, "Loved the photos. I've not ever seen such beautifully colored grain piles--very unique." SK from TX, I can use my imagination and do the same thing down here in West Texas! Thanks for inspiring me."