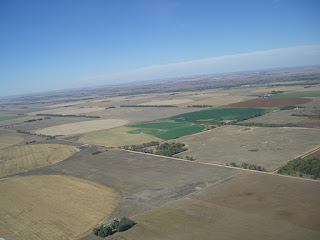 I have written blogs about "the wide open  spaces" celebrated in poems, music, and stories, and it is true that when homesteaders like Isaac Werner arrived there were almost no trees and it seemed they could see forever.  Yet, what could be more "wide open" than the flat farm land of today, with far fewer farm homes to interrupt the horizon than existed in Isaac's day.  Each homesteader could claim one quarter section of land, which meant that each square mile could have four different homesteads claimed by four different families.  The typical township was 6 miles wide and six miles long, with 36 square miles or 144 quarter-sections of land that could be homesteaded.  Of course, not every quarter-section was good for farming, and there were some timber claims among the homesteads, on which the primary crop was timber.  Not every acre of a claim was plowed, like the pasture south of our home which remained unplowed prairie.
The point is that the image of the "frontier" that many of us have is more related to western movies than to the reality of the mid- to late 1800s when Isaac Werner staked his homestead and timber claim.
In 1893, the year of the Chicago World's Fair, Frederick Jackson Turner published a book titled The Significance of the Frontier in American History.  His theory was that as the line Americans thought of as "frontier" moved West, it  created a particular American identity.  The land was different from where people had lived before, and they had to adapt to its differences in order to survive.

Whether it was clearing trees to make fields or cutting sod to remove the thick roots before crops could be planted, it required strength and courage and determination.  The land seemed wild, and the traditions and rules of places from which they and their ancestors had come did not seem to apply in this new land. 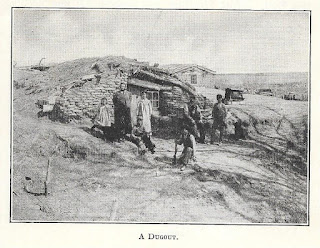 They were compelled to live in crude structures, especially where there were no trees nor stone to use for building their homes.  Some felt it necessary to carry a weapon, whether for defense from animals or from lawless men.  Emergencies, such as  prairie fires and illnesses, had to be fought on their own.  Doctors and lawmen were often too far away to call, and fires too immediately threatening to seek help beyond their own community.

Turner's Thesis was, and perhaps still is, that the American character became more democratic, more intolerant of hierarchy, more individualistic, and more violent.  However, he also theorized that Americans were less artistic and less scientific.

His last two conclusions were ironic, since Turner presented his thesis to the American Historical Association at the Chicago World's Fair, which was intended to display the inventiveness and creativity of the young nation to the rest of the world.  The fairgrounds themselves, the displays of fine art, the inventions--including electric lights, were on display to show the world that Americans  were not less artistic nor less scientific.  Rather, the people of this nation were equal to or even ahead of other nations of the world.

However, Turner's Thesis is interesting to consider.  Did the challenges that our ancestors faced change the nature and character of the American people in ways that linger even today?

Heather Cox Richardson, American political historian, in her book "West from Appomattox, the Reconstruction of America after the Civil War would argue and continues to argue that it very definitely had an impact.https://www.amazon.com/West-Appomattox-Reconstruction-America-after/dp/0300136307
I have been a firm believer for decades that to understand America one had to read Western novels. I could not put the why in words but Dr. Cox Richardson has done it quite well.