The Fashion Influence of Men

Who can forget those handsome actors from the 1940s and the 1950s, some of them continuing their popularity even longer--Cary Grant, Humphry Bogart, Gregory Peck, James Stewart to name a few of my favorites, still charming a new generation in black & white movies shown on television.  They were fashion trend setters, and rarely did you see them in a suit or sport coat without a pocket square.  Until researching this blog, I would have said "handkerchief," but that would have been a fashion mistake.

A pocket square is a decorative handkerchief that is worn with a suit or jacket, usually a square 10" to 17", made from silk, linen, or cotton.  Popularized by these trendsetters of an earlier era, the pocket square remains fashionable today.

Men contributed to another popular trend during both WWI and WWII, when hankies were printed with various patriotic symbols for service men to give to wives and girlfriends. 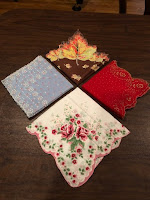 In the 1930s, the depression limited money for ladies to spend on their wardrobes, and often the only option for changing her outfit was to change her handkerchief.  During WWII women served the war effort by giving up silk stockings and silk handkerchiefs so the material could be used for parachutes.  This was the era of improved color-fast dyes, and rather than the fancy needlework and expensive fabric, women began buying colorful printed hankies.  These became part of ladies' wardrobes, tucking them into pockets of suits and dresses, tucking them into belts, or tying them at their throat. 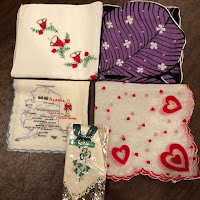 These printed hankies could change with the seasons or have a holiday theme.  From Christmas, St. Patrick's Day, to Valentines Day, or even a hint to remind friends of a lady's traveling to special places, the decorations on hankies were nearly endless.
Some of them were folded with ribbons for gift giving, and some even had their own gift cards.  My mother-in-law loved receiving cards and letters, and she saved them in empty shoe boxes.  An entire wall in her sewing room had shelves on which were saved row after row of her treasured cards and letters.  Of course, when she moved to assisted living, her cards could not go with her, and it nearly broke her heart.
We put some of her cards into storage for her, and after her death, I found a birthday card with a pretty hankie inside.  Perhaps she had overlooked the hankie inside when she tucked the envelop into a shoe box before putting it on the shelf.  Or, perhaps she thought it was just too pretty or too filled with loving memories to use.
Posted by Lynda Beck Fenwick at 7:43 PM

One of the hardest part of growing old is that no one wants your memories. Partly storage and partly they are YOUR memories not those who come behind. I read an article that said "No one wants your books" and it brought tears to my eyes.