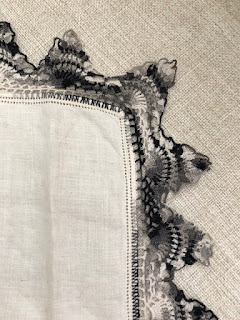 I find odd sources of inspiration for my blog posts, and with autumn here, my inspiration came from adding tissues to our shopping list, knowing pollen season was approaching.  Who knew that sneezing would inspire a blog?  I was surprised by how interesting the history of handkerchiefs is.

I have inherited quite a collection of handkerchiefs from my mother and mother-in-law, as well as some from their mothers.  The detail at left and the full image below are images of the handiwork of my grandmother, Maude Wilson Hawk.

The history of handkerchiefs dates back to China, when kerchiefs were used to shield heads from the sun.  Interestingly, the British also were known in modern times to tie the corners of a handkerchief and wear it on their head at the beach.  The name change from kerchief to handkerchief was intended to distinguish between a square cloth as a head covering and a square cloth meant to carry. 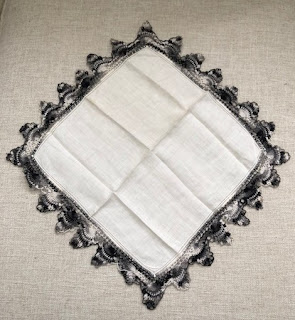 The romantic use of a handkerchief dates to the Middle ages, when a knight would tie a lady's handkerchief on the back of his helmet for luck.  Handkerchiefs became a symbol of wealth and status, so valuable that they were listed in dowries and bequeathed in wills.  Persians reserved handkerchiefs for the nobility, and in other cultures aristocrats emphasized their status by including elegant handkerchiefs in their portraits.

A tradition passed down to our own time, connected with both romance and status, is the beautiful handkerchief for brides.  In America, the bride's handkerchief probably originated in the South, and in some families the bridal handkerchief is passed through generations.  Using silk and linen for handkerchiefs was part of the display of status.  The Handkerchief  Shop online displays beautiful bridal handkerchiefs embroidered with special inscriptions.  My favorite is a gift to be given by the bride to her  father. Brides also use family handkerchiefs as the "something old" to carry.

Next week's blog will bring handkerchief history into the 1900s.

I used to be a red with white polka dots in my back pocket type person. That could be used for which it was intended. The fancy ones were too nice. I suppose one could carry both.

You and the clever mothers described in the current blog have the same wisdom!